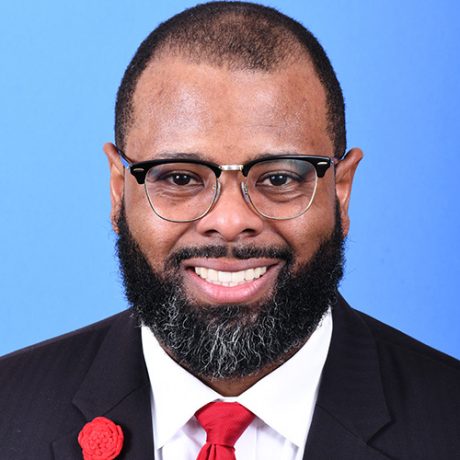 Peter Eley ’08MED, ’11PHD has always been someone who likes to solve complex problems and who likes trying to do things that others say are difficult. Because of that and his love for helping people, Eley was led to pursue a career in mathematics.

He later moved into higher education, working as a webmaster and data manager at Saint Augustine’s University (SAU) and then as a North Carolina Mathematics and Science Education Network (NC-MSEN) Pre-College Program coordinator at Winston-Salem State University. It was during his time at SAU where he was inspired and encouraged by his supervisor to attend the NC State College of Education and work under the guidance of Lee V. Stiff, Ph.D.

When Eley was a sixth-grader, he saw Stiff’s picture in his math book as one of the authors and that stuck with him. From that point on, he knew he wanted to write textbooks like Stiff. With a passion for math and math education, Eley wanted to work with Stiff. So he applied to NC State.

Eley has found his niche, having worked in higher education for 18 years. For the past 11, he has worked in the College of Education at Fayetteville State University, where he started as an instructor of mathematics education and worked his way up to associate professor.

For the past two years, he has served as a professor of mathematics education and interim chair of the Health, Physical and Secondary Education Department. In that role, he is responsible for the day-to-day operations of the department, hiring faculty, managing budgets, teaching, conducting research, advising, fundraising and supporting the mission and strategic plan of the university.

Eley began his research in the area of equity and access and using technology to achieve these goals, but he has recently transitioned to intersectionality and using data science to identify issues of equity and access in rigorous math education. His research was inspired by Stiff, who introduced him to access issues in North Carolina. Eley also personally knows people who were denied access because of policy issues, which has compelled him to do something about it.

“My doctoral program at NC State did an excellent job of preparing me to be a professor in math education. Through the program, I was able to build my confidence in my ability to reach my students. Additionally, the program at NC State is very technologically advanced when it comes to supporting students using technology. I learned so much from Karen Hollebrands, Ph.D., and Hollylynne Lee, Ph.D., in using the latest technology to meet the needs of my students.

I also really enjoyed the flexibility that [the program] offered me. When I came into the program, I was a working, married professional. Flexibility in a doctoral program made this program manageable for me.

The success I had at NC State has not been a linear progression. I went through many obstacles and setbacks. I applied to NC State as an undergraduate and was not accepted. I struggled to adjust my first year in graduate school in the math department and was on academic probation. I did not pass the doctoral qualifying exam the first time around. My advisor made me stay one extra semester to improve my writing. I drove from Winston-Salem, North Carolina, to Raleigh, North Carolina, (108 miles one way) to class twice a week while working full time for six years. It got very tough at times, but I did not quit. Remember, that as a lone wolf, your relationships matter and you are being trained to lead the pack! You are not in this alone, you are not the only one, you are just one of the ones that will ‘Think and Do!’”