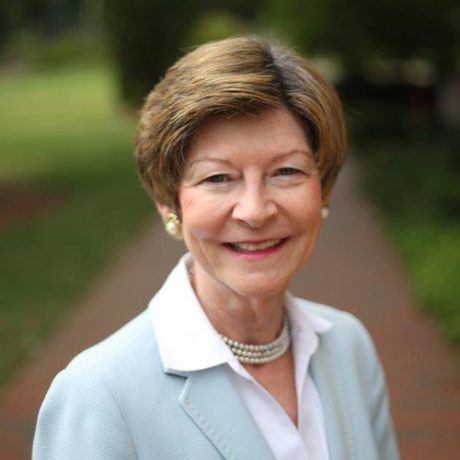 Before Pamela Joyner ‘95EDD was even born, her father decided that he wanted her to be a pharmacist. He believed that pharmacy offered many diverse opportunities. Growing up, Joyner spent many of her Saturdays visiting family members who were practicing pharmacists in North Carolina. Her aunt was one of the early graduates of the UNC Eshelman School of Pharmacy.

Through those visits, she realized the difference a pharmacist can make in improving and optimizing care of a patient. Joyner went on to earn both a B.S. in pharmacy and an M.S. in hospital pharmacy from the UNC Eshelman School of Pharmacy before enrolling in the Doctor of Education program in the NC State College of Education.

Early in her career, she served as a faculty member in the UNC Eshelman School of Pharmacy and practiced at the Wake Area Health Education Center at Wake Medical Center in Raleigh. After earning her doctorate, Joyner was appointed director of external professional programs at the pharmacy school in 1996, where she implemented the school’s off-campus External Doctor of Pharmacy program. In June 1998, she was named associate dean for professional education before being promoted in 2010 to executive associate dean for professional education.

In that role, her primary responsibility was for the school’s Doctor of Pharmacy (PharmD) accreditation, which included the preparation of comprehensive documentation for re-accreditation and annual interim reports. She also provided leadership for all professional initiatives for the offices of curricular and student affairs, the PharmD curriculum, the professional experiential education program and the school’s continuing education program.

She also had a major role in the planning and implementation of the school’s satellite campus in Asheville and collaborated with members of the school’s Committee on Rural Health to develop the Rural Pharmacy Health Certificate Program.

Joyner retired in April 2018 and now serves as consultant to the dean and clinical pharmacy emeritus, where she assists the dean of the pharmacy school and collaborates with the foundation and alumni association as needed. Most recently, she consulted with the school on the preparation of their 2020 accreditation self-study documentation for the Accreditation Council for Pharmacy Education.

Interacting with students in the program who represented leadership in universities, community colleges and professional programs, including medicine, dentistry and public health, provided me with a broader perspective. This has helped me in my career as I have collaborated with individuals and groups from the US and throughout the world.

“I was attracted to the doctoral program at NC State for many reasons: quality of educational opportunities; nationally and internationally recognized faculty; flexibility of late afternoon and evening classes; and high recommendations from three of my professional colleagues who had completed the program.

My dissertation focused on a needs assessment for a University of North Carolina External Doctor of Pharmacy Degree program. Dean William Campbell and two additional faculty from the UNC Eshelman School of Pharmacy served as members of my dissertation committee.

Following my graduation from the doctoral program, the school’s faculty approved moving forward with the establishment of this off-campus program, where I was appointed director of external professional programs at the school and coordinated the development and implementation of the External PharmD Program, an initiative designed to provide an opportunity for practicing pharmacists across North Carolina to enhance their clinical training and earn the doctor of pharmacy degree. From spring 1996 through spring 2008, 328 North Carolina pharmacists completed this program.

I was extremely fortunate to have a dedicated advisor, Dr. Ronald Shearon, who spent many hours meeting and working with me throughout the program.

Interacting with students in the doctoral program who represented leadership in universities, community colleges and professional programs, including medicine, dentistry and public health, provided me with a broader perspective. This has helped me in my career as I have collaborated with individuals and groups from the US and throughout the world.”