When the coronavirus pandemic hit in March 2020, spring and summer sports seasons, including the 2020 Olympic Games, were canceled or postponed. This forced Wolfpack swimmer and College of Education senior Ky-Lee Perry ’21 to make a decision — retire from swimming or become a professional athlete.

Perry chose to become a professional athlete. She joined DC Trident of the International Swimming League (ISL), which is the first professional league for swimmers. As a part of DC Trident, Perry has traveled the world competing in preparation for the 2021 Olympic Trials. 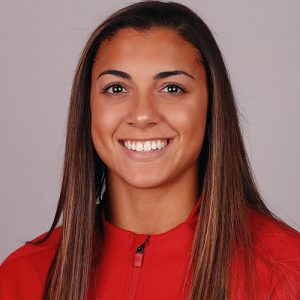 But this won’t be her first time competing for a spot on the United States Olympic Team. Perry qualified for the Olympic trials in 2016.

“When I qualified for the 2016 Olympic Trials, it was very surreal. Words can’t even describe how happy I was,” she said. “In the 1500m freestyle, I always just kept getting closer and closer to the qualifying time and I kept missing it. I just kept trying and I never gave up.”

Perry remembers that exact moment when she touched the wall and knew she had made it. Being young and intimidated by all the big time swimmers, she says that the 2016 Olympic trial experience was nerve-racking at first and that she was nervous swimming in a stadium full of thousands and thousands of people. But she used that opportunity to gain experience.

And that experience will prove to be valuable as she starts her professional career and heads into the 2021 Olympic Trials.

Aside from being a 2016 Olympic Trials qualifier, Perry’s biggest accomplishments in the pool are being named the 2017 ACC Freshman of the Year, being crowned the 2017 ACC Champion in the 50m freestyle, earning 16 All-American honors and being an eight-time ACC champion. She also earned top-eight finishes in the 1500m freestyle at both the NCAA Tournament and the 2019 World University Games, where she won gold in the 50m freestyle.

And on May 14, she will add another accolade to that list — earning her bachelor’s degree in middle grades English Language Arts and social studies education.

Balancing athletics, academics and field experiences for the NC State College of Education wasn’t easy for Perry, but Perry says the support she received from the faculty was invaluable.

“I tried to do as much as I could to schedule things out so nothing overlapped, and so I’m not missing anything. I’ve learned that communicating with my coaches, professors and cooperating teachers goes a long way,” Perry said. “The key aspect is communication.”

When Perry decided to turn pro this past fall, it changed her availability and scheduling, but she found a way to balance being a professional athlete and her academics. Because of the pandemic, she was able to meet with her cooperating teachers more, go into her field experiences and complete her student teaching — all with the help and support of the College of Education faculty. Without that support, Perry says she would have drowned under all the work.

“I’ve gotten to do both in-person and online teaching through my field experiences. Over the past couple of years, I’ve gone into schools and worked with my cooperating teachers, observed classes and observed how he or she was teaching and their structure,” she said.

“I love that our program allows us to do things like this because, even though nothing can really prepare you for your first year of teaching because it is nerve-racking, there are ups and downs and things you can never see coming, it does give us a good foot in the door with what to expect and how to handle certain situations if they do come up.”

Once Perry retires from swimming, she plans to earn a master’s degree and deepen her knowledge in the field of education. Having a minor in psychology, she is also interested in focusing on that area, with an interest in becoming either a school psychologist or a sports psychologist.

“I feel that my background and the things I’ve learned can really help a lot of people within the educational and athletic aspects of life,” she said. “I want to give back to those who are still on their journey.”

And being a swim coach isn’t out of the question. Perry, who has coached at a summer league for two years, has been looking into assistant coaching positions.

“Coaching is like teaching. You are teaching them how to do different things,” she said. “I’ve done a couple of clinics with children and they love learning new things. With coaching, I am getting both aspects of swimming and teaching someone. That just makes me motivated.”