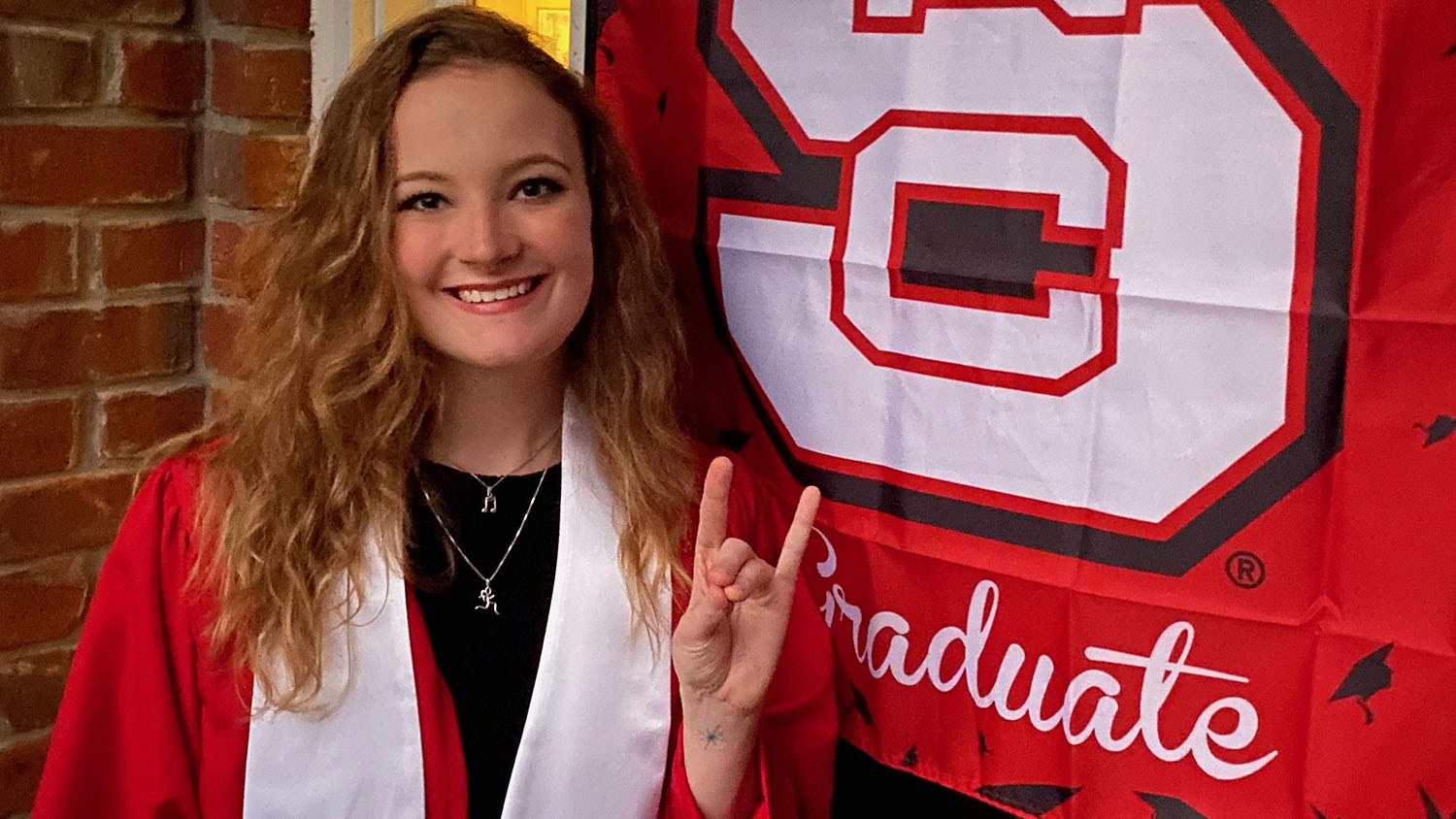 Charlotte Melville ‘20 discovered her passion for teaching while sitting in Jason Cheek’s Advanced Placement Calculus class during her senior year at Northern Guilford High School. She found herself taking notes on calculus and on Mr. Cheek’s teaching methods.

“I loved that class because it challenged me, and I became more intrinsically motivated than I had ever been before,” said Melville.

That class inspired Melville to become a math teacher.

“Math was never my best subject. I had a hard time memorizing my multiplication facts and I always had to work harder in my math classes than I did in any of my other classes,” she said. “But I loved that challenge. I love that math usually has one answer, but you can find so many different paths to get to the answer.”

A Summerfield, North Carolina, native, Melville didn’t want to leave North Carolina for college. She chose NC State because it seemed like the best in-state option for her. And she fell in love with the campus and instantly knew she wanted to be here.

She chose the College of Education because of the people. The staff, she says, were so enthusiastic and everyone seemed “genuinely excited to be there.” She felt comfortable approaching everyone with questions and knew the college would be a great fit for her.

Melville wanted to major in mathematics education because of her passion for math and she wanted to challenge her students the way she was challenged in Mr. Cheek’s class.

“I think teaching math is so much fun, and I’ve never really considered teaching anything else. I want to challenge my students the way my math teachers challenged me,” she said.

She chose to focus on middle grades because of her experience in middle school. As someone who had a hard time, she says, she remembers ridiculous rumors being spread about her and students making fun of how she looked. But her teachers stood up for her and believed in her. And she wants to do the same for her students.

“Middle school is hard, but if I can make it even a little bit easier for my students, I’ll be happy.”

With two brothers in college — one at Harvard University and one at Georgia Tech — Melville was hoping to benefit from financial support to help assist with her college tuition. She was fortunate enough to receive assistance every year, including the College of Education Leadership Scholarship during her first three years.

During her senior year, Melville received the Jerry and Elizabeth Godwin Scholarship.

“I’d like to say thank you to Jerry and Elizabeth Godwin for my scholarship. My goals of getting national board certified and going back to school are expensive. And sadly, teachers don’t make as much as they should,” she said. “Their contribution now makes it easier for me to pay for my education in the future, and I’m so grateful for that.”

For Melville, receiving the scholarship also meant a lot personally. “It’s an incredible feeling to know that someone believes in you enough to help you pay for your education,” she said. And for her, the scholarship was a chance for her to redeem herself after she struggled academically one semester.

During the 2018-19 academic year, Melville said she struggled with depression and every assignment seemed like a massive mountain she had to climb. The faculty in the College of Education helped her get through that time.

“They were incredibly understanding and allowed me to take medical incompletes in some of my classes so I could finish them when I was better. I learned so much about myself through the support the College of Education gave me,” she said. “The staff there helped me become a stronger, more confident, more resilient version of myself, and for that I am forever grateful.”

As a future educator, she hopes she can support her students in the same way. And by earning the scholarship, she was motivated to work harder.

“Since I knew someone else was paying for part of my education, I wanted to make sure I made their contribution worthwhile,” she said.

Because the college gave her so much, Melville gives back to the College of Education as a small token of her appreciation and as a way of saying “keep doing what you’re doing.”

“I want the College of Education to continue to inspire and encourage young teacher candidates to be the best they can be,” Melville said.

Throughout her time at NC State, Melville has gotten to delve deeper into her love of acting, performing as Lana Nelson in Girl In Space and Fanny Cavendish in The Royal Family for NC State University Theatre. She has also run three half marathons since starting her college journey and is currently training for a full marathon.

Melville, who graduated on Friday, Dec. 4, 2020 with her bachelor’s degree in mathematics education, plans to work as a middle school math teacher for a few years before becoming National Board Certified. She hopes to return to school and earn a master’s and a Ph.D. with the intent of eventually becoming a professor of education.

“I always knew I wanted to help people, and I think one of the greatest ways to help someone is to give them an education. ‘Knowledge is power,’ as my parents always say, and I want to instill some of that power in my students,” she said. “So many of my teachers positively impacted me, and I’d be honored to have even half that impact on someone else.”