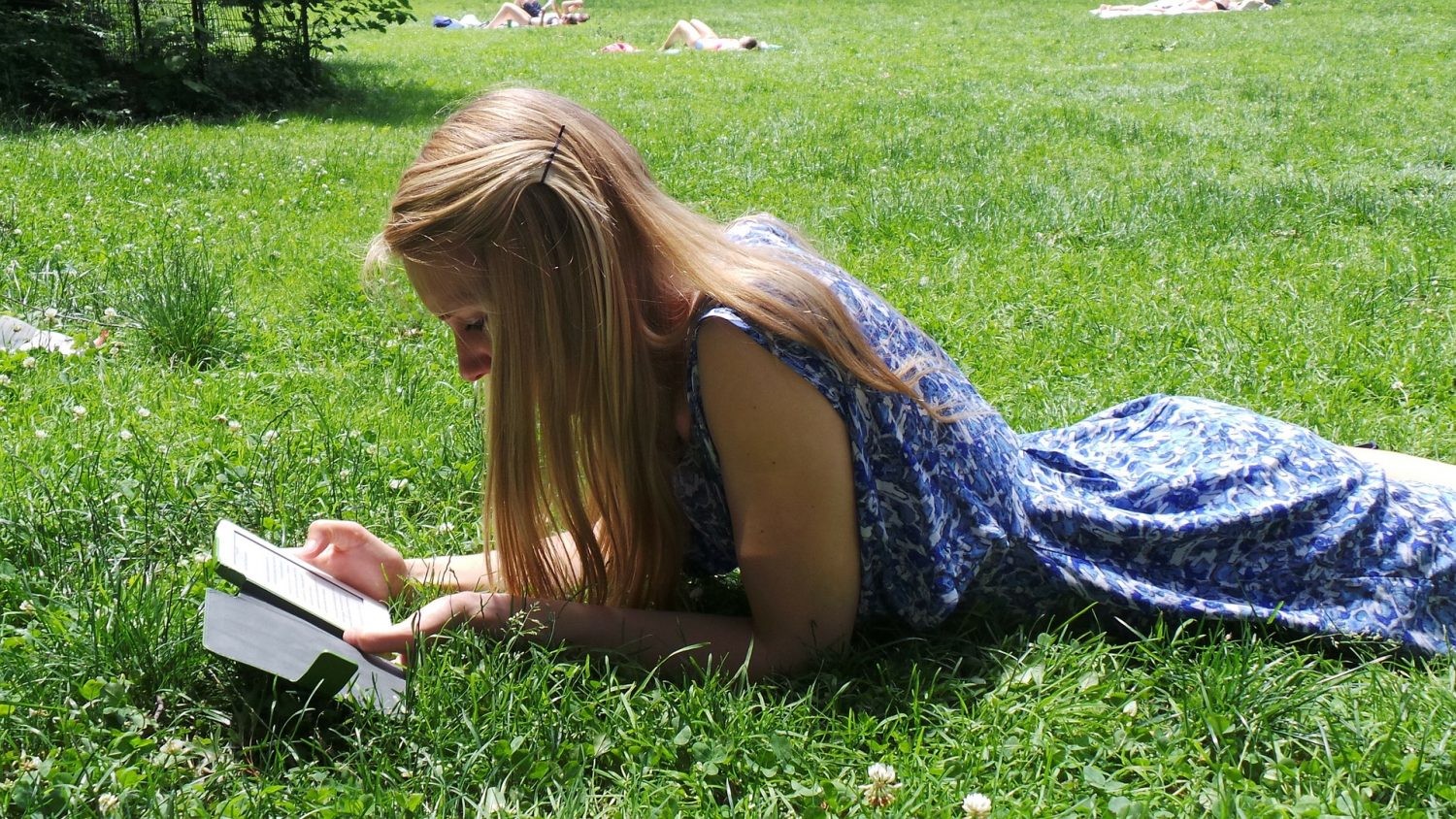 The Literacy and Community Initiative (LCI), a collaboration between the NC State College of Education’s Department of Teacher Education and Learning Sciences, the Friday Institute for Educational Innovation and community-based organizations, is committed to serving marginalized students through text, including student publications, as well as advocacy and leadership.

To encourage reading among young girls involved with CORRAL Riding Academy — an LCI partner nonprofit organization that pairs rescued horses with girls in high-risk situations while providing academic and emotional support– LCI has created a list of recommended reads for CORRAL’s book club, which they are resharing more broadly to encourage reading among youth during the coronavirus (COVID-19) pandemic.

Under the supervision of Assistant Professor Crystal Chen Lee, Ed.D., undergraduate pre-service teachers and LCI’s undergraduate research assistants at CORRAL, Desiree McClarnon and Angelique Marrero, curated the list, which consists of books that either one or both of the students have read.

Many books were chosen because they incorporate themes and lessons that teen readers can relate to. Although most selections on this list can be read independently, some should be centered around discussion, as they deal with sensitive topics.

The Girl Who Drank the Moon by Kelly Barnhill: Themes of family and bonding are incorporated into this story about a young girl who was accidently given magical powers and must learn to control them and protect those she holds dear.

The Poet X by Elizabeth Acevedo: Written in poetic verse, this book explores many themes that are relatable to young girls through the story of a young girl in Harlem who discovers slam poetry as a way to understand her mother’s religion and her own relationship to the world.

The House on Mango Street by Sandra Cisneros: Told in a series of vignettes, the book follows the story of a young girl growing up in Chicago and inventing the person she will become. The book shares the good and bad in life as shared from the perspective of the Latina community.

Fever 1793 by Laurie Halse Anderson: Relatable to many amidst the coronavirus pandemic, this historical fiction book shares the story of 14-year-old Mattie Cook as she and her family fight to stay alive as the Yellow Fever spreads across the United States.

Esperanza Rising by Pam Munoz Ryan: This historical fiction book tells the story of a young girl whose life is turned upside down when she must leave her life of luxury in Mexico and learn to rise above difficult circumstances as she lives in a camp for farm workers in California during the Great Depression.

The Giver by Lois Lowry: This dystopian novel revolves around the perfect organization of society and unquestioned faithfulness of its people and offers students opportunities to work on critical literacy skills like inference and figurative language.

Long Way Down by Jason Reynolds: In a story centered around decision making and reflection, this book takes place over the course of the sixty seconds in which a teen must decide whether or not he will murder the man who killed his brother.

The Astonishing Color of After by Emily X.R. Pan: This book handles the topic of grief through the story of Leigh Chen Sanders, who uncovers family secrets and forges a new relationship with her grandparents in Taiwan following her mother’s suicide.

Dear Martin by Nic Stone: This book explores issues related to racism through the story of Justyce McAllister, who leaves his rough neighborhood for an Ivy League school but becomes the subject of ridicule in the media following a police shooting.

Because of Winn-Dixie by Kate DiCamillo: Dealing with grief and personal growth, this book centers around the story of Opal and the ways in which the dog she found at a local supermarket helps her learn about her mother and the varied residents of her new hometown.

New Kid by Jerry Craft: This graphic novel shares the story of Jordan Banks, who struggles with fitting in at school while staying true to himself when he is sent to a prestigious private school with a low level of diversity.

Life as We Knew It by Susan Beth Pfeffer: Told through a series of journal entries, this story addresses how people learn to live amidst a state of fear after a meteor knocks the moon closer to earth, causing worldwide disasters including tsunamis, earthquakes and volcanic eruptions.

Scythe by Neal Shusterman: In a story about life and death, two teens must grapple with their assigned role to take the lives of others as apprentices to scythes, the only people who can end life in a world without hunger, disease and war.

Anne of Green Gables by L.M. Montgomery: Dealing with themes of growing up and finding identity, this book follows the story of an orphan with an enormous imagination who hopes she has found her permanent home.

Saving Fable by Scott Reintgen: Set in The Land of Stories, this book follows the tale of Indira, a side character who has failed to become a hero, but must step up to save the day when she begins piecing together clues about who has been threatening their world with dark magic.

With the Fire on High by Elizabeth Acevedo: This book focuses on taking what life throws at you and making the best of your situation through the story of high school senior Emoni Santiago, who dreams of becoming a chef, but doesn’t have the time or money to pursue it.

The Hate U Give by Angie Thomas: Addressing topics like confronting racism and the desire to live a normal teenage life, this book tells the story of 16-year-old Starr Carter as she navigates the differences between the poor neighborhood where she lives and the fancy suburban prep school she attends.

Legend by Marie Lu: This dystopian novel follows the story of June, a smart and strong 15-year-old who must face the truth and carve her own direction in life as she crosses paths with the teenage girl accused in her brother’s murder.

Internment by Samira Ahmed: This book tackles issues surrounding Islamophobia and the desire to advocate against wrongdoing through the story of a 17-year old who leads a revolution against the internment camp she has been placed in.

On the Come Up by Angie Thomas: This book confronts the topic of class struggle through the story of 16-year-old Bri, who dreams of making it big as a rapper as her family faces financial hardship and potential homelessness.

Small Great Things by Jodi Picoult: This book explores race relations in the United States through multiple perspectives with the story of a white family who requests that a black nurse not care for their son, only to sue her when she hesitates to save him in an emergency.

Americanah by Chimamanda Adichie: Combining romance, politics and social justice, this story focuses on a young couple who leave their home in Nigeria and must grapple with their race for the first time as they live separately for 15 years in America and England.

The Handmaid’s Tale by Margaret Atwood: This dystopian novel depicts a world where women are only used for reproduction, exploring women’s rights issues and the consequences of devaluing women in society.

Becoming by Michelle Obama: In this memoir, former First Lady Michelle Obama shares the experiences that shaped her life and chronicles her personal journey of self-discovery.

Hunger by Roxane Gay: This non-fiction selection, developed from popular essays and a long-running Tumblr blog, talks candidly about author Roxane Gay’s struggle with self-image due to being overweight and her discovery of what it means to take care of yourself.

Between the World and Me by Ta-Nehisi Coates: Formatted as a letter to the author’s son, this book explores issues of racism in society and what it means to be a black person in America.

Educated by Tara Westover: This coming-of-age story offers a look at the value of education, a privilege the author was denied throughout her childhood in the mountains of Idaho, where she was raised by survivalists who focused on preparing for the end of the world.

Just Mercy by Bryan Stevenson: This true story shares the story of the young lawyer who founded the Equal Justice Initiative and his first case; freeing a young man who was sentenced to death for a murder he insisted he didn’t commit.

Tuesdays with Morrie by Mitch Albom: In this memoir, the author shares the story of the opportunity he had to reconnect with his mentor, Morrie, in the last months of his battle with ALS, and how their weekly meetings became a final lesson on how to live life.

Beatrice and Virgil by Yann Martel: This story about a donkey, a monkey and the journey undertaken by a man named Henry explores how narratives about groups of people can be shared in order to oppress them.

Slay by Britteny Morris: This book follows the story of 17-year-old Kiera Johnson, one of few black students at her school, and the way she struggles to reconcile her identities as an honors student as well as a developer in a secret multiplayer online role-playing card game.

Looking for Alaska by John Green: This book explores the ups and downs of being a teenager and the journey to find your place in life through the story of Miles Halter, who leaves his safe life at home and meets an interesting young girl, Alaska Young, at his new boarding school.

Speak by Laurie Halse Anderson: A novel that should be centered around discussion, as it deals with heavy themes including rape, this book shares the story of a high school student who learns to find her voice, advocate for herself, and stop letting past events define her.