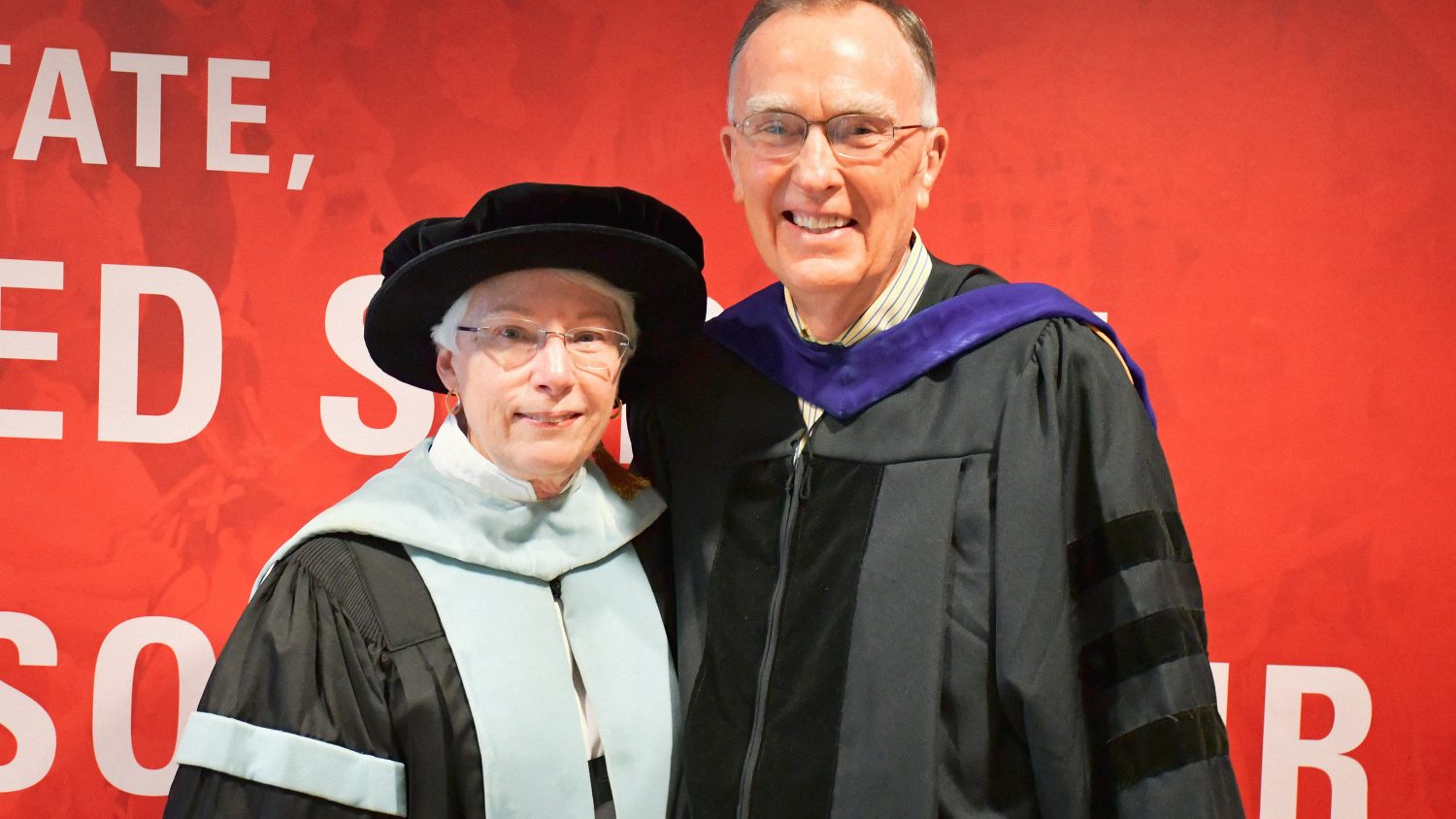 Ed Gerler with College of Education Dean Mary Ann Danowitz at the May 2019 Graduation Ceremony.

Ed Gerler, Ed.D., has attended about 80 graduation ceremonies in his 42 years with the NC State College of Education. But when he was recognized at the May 2019 graduation ceremony, he heard an audible gasp from students who didn’t realize quite how long he had worked for the college.

Honor Ed Gerler’s retirement from NC State after 42 years with a gift to the College of Education’s Retired Faculty Scholarship Endowment, which provides scholarships to students in the college.

“It’s hard to believe that all of those years have passed,” said Gerler, who joined the NC State faculty in 1977.

Gerler, a professor of counselor education whose speciality was school counseling, retired May 16 after serving the college in multiple roles over the past four decades. Those roles include associate dean for research and external affairs, affirmative action officer and director of NC State’s Office of School Services.

Though he had opportunities to leave for teaching and administrative positions at other universities over the years, each time he felt NC State was where he belonged.

“I love teaching and I love doing research, and my last years at NC State have been so gratifying because I’ve been able to do what I wanted to do,” he said. “I am really grateful that I stayed at NC State.”

Just a few weeks into his retirement, he is already making plans to travel and spend time helping his wife in her career as a novelist, but saying goodbye to the classroom is tough.

Seeing his former students not only find jobs but win scholarly awards and receive national recognition for their work in counseling has been one of the most meaningful parts of the job, he said.

Of course, the student body has changed since Gerler first entered a classroom at NC State. The most impressive change, he said, is the commitment to diversity demonstrated by the number of African American students in the College of Education now compared with 1977.

“When I came to NC State, the number of African American students or students of color in our program was very, very low and that was true across the college,” he said. “I was sitting at graduation three weeks ago, and I was just so impressed by the diversity of the graduating class.”

In his research, Gerler worked toward creating change in the area of school violence prevention. He was a founding editor of the Journal of School Violence, and co-authored School Counseling for the Twenty-First Century, 5th edition, a seminal textbook in the school counseling field.

Though he has made important contributions to the field, there are huge strides needed to stem the problem of school violence, he said. He hopes that future researchers will focus on the links between substance abuse and violence as well as the need for more mental health resources for students.

“In terms of actually what we accomplished in the area of school violence, that is really up in the air,” he said. “There seems to be such a huge problem with violence throughout our country, but in particular in public schools. So, I’m not sure I can say I made much of a contribution in preventing school violence.”

Although there is still work to be done, Gerler said he believed the time was right to say goodbye, adding he wanted to end his career on a high note.

“I know that as you get older, health issues and memory issues and so on begin to take their toll and I wanted to leave while I was still doing a good job,” he said.