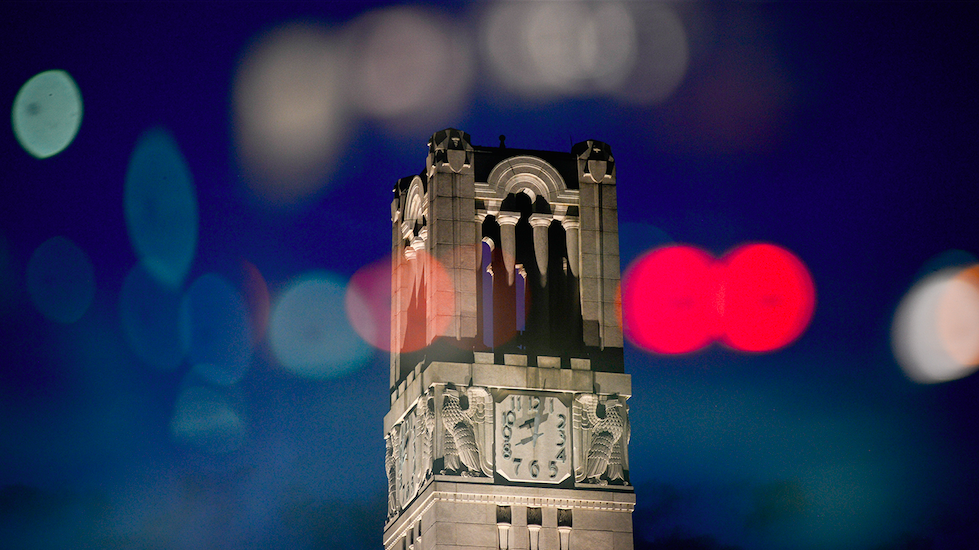 NC State experienced another outstanding fundraising year, as its Think and Do the Extraordinary Campaign continues to transform all aspects of campus life and power the university’s strong momentum.

Think and Do the Extraordinary

Your support of the College of Education Excellence Fund directly impacts our programs, students and faculty. This unrestricted fund provides administrators and faculty the flexibility to strategically address opportunities and needs. Give now to create an extraordinary future for our college.

NC State publicly launched its most ambitious fundraising effort, the five-year, $1.6 billion Think and Do the Extraordinary Campaign, in October 2016. The Campaign is designed to better position the university to create economic, societal and intellectual prosperity for the state and beyond, in perpetuity. Campaign priority areas include extraordinary opportunity, purpose, places, experienceand leadership.

The Campaign has garnered support from nearly 80,000 donors, who hail from all 100 counties of North Carolina, all 50 states and 62 foreign countries.

“We are seeing an incredible response to our Campaign,” Chancellor Randy Woodson said. “Our supporters are ensuring that higher education remains accessible by providing more opportunities and resources to more students. They’re strengthening our faculty and its ability to collaborate, innovate and solve the world’s biggest challenges. They’re helping us create new spaces and reinvent other campus facilities, and so much more.

“This level of investment represents tremendous widespread support for this great university, and propels NC State forward toward achieving its full potential. We are certainly grateful.”

At the end of the fiscal year, the university’s endowment stood at $1.3 billion, which places it among the top 100 largest higher-education endowments in the country.

“One of the most exciting and important of the many milestones that donors have helped us reach in the past few years is the growth in our endowment, which is critical to positioning NC State well for the future,” Woodson said. “Robust endowments are the bedrock of all great universities.”

When Woodson was appointed chancellor in April 2010, he made increasing philanthropy generally, and building the endowment specifically, a strategic focus. NC State’s endowment has more than doubled since 2010, when it stood at $503 million, and reached the $1 billion milestone well ahead of Woodson’s goal of achieving that level by 2019. The combination of strong investment performance coupled with extraordinary philanthropy has propelled that growth.

“I think we are making great progress in continuing to build the culture of philanthropy at NC State across all segments of our campus community, and to increase awareness of what a difference donors are making,” said Brian Sischo, vice chancellor of university advancement. “Alumni and friends are passionate about our university and enthusiastic about NC State’s upward trajectory.

“We’ve also seen gains over the past few years in faculty and staff giving, for example, and in first-time donors. Our student giving has almost tripled over the past couple of years, which sends a powerful message about NC State’s future.”

For the fiscal year, nearly 1,200 current students made a gift.

Donors are having an impact in a range of areas at the university. Among notable gifts during the fiscal year were:

Among other highlights, the Caldwell Fellows, the university’s oldest undergraduate scholarship and leadership program, is celebrating its 50th anniversary this year. Thanks to many alumni and other supporters, the program has impacted nearly 1,400 students.

Private support also has helped NC State’s Study Abroad Office surpass its 2019 enrollment goals a year early. Data for 2017-18 shows a 53.6 percent increase in total enrollment in study abroad and a 129 percent increase in study abroad by underrepresented students, including first-generation college students and students who are racial or ethnic minorities; the university set a goal in 2014 of increasing each of those measures by 50 percent over five years.

“All across campus, NC State’s momentum is strong. We are proud of the strategic gains that we’re making toward a bigger, bolder future, while remaining true to our land-grant roots and remaining the school of choice for North Carolinians,” Woodson said. “We’re just getting started.”

This story was originally published on the Think and Do the Extraordinary campaign news website.

In the News, News

Campaign for NC State, College of Education giving, homepage-news, in-the-news, news, Think and Do, Think and Do the Extraordinary

Research shows that childrens’ school readiness improves if they attend a preschool program, but the initial benefits of Pre-K don’t always reliably persist as kids progress through elementary school. To combat this “Pre-K fadeout,” many scholars have called for preschool through third grade (P-3) alignment, but a study by NC State College of Education Assistant Professor Michael Little, Ph.D., recently demonstrated that attending a Pre-K program located within an elementary school does not guarantee alignment.