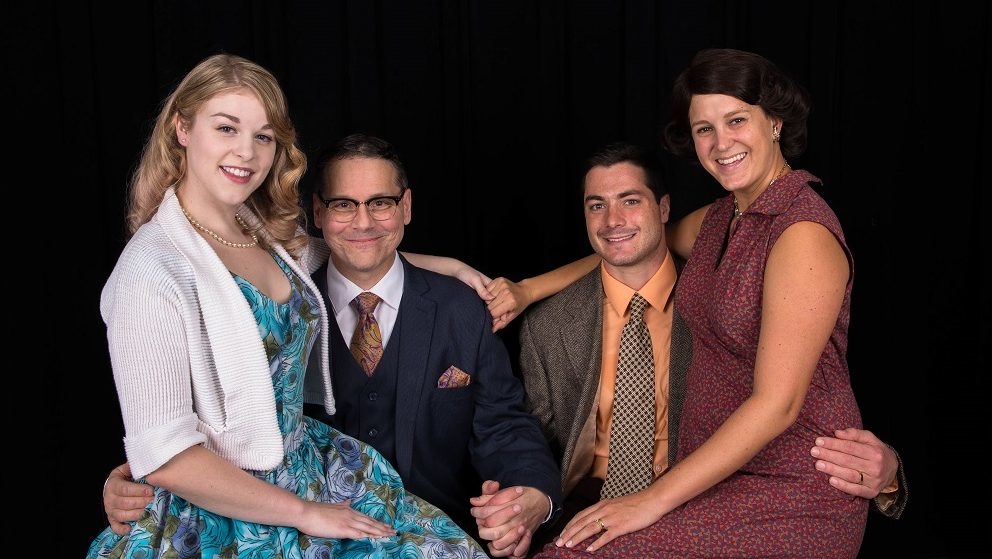 Benoit Sabourin, development associate with the Graduate School, hadn’t heard of the Lavender Scare when he decided to audition for Raleigh Little Theatre’s production of “Perfect Arrangement,” but he was intrigued by the story of how thousands of gays and lesbians were outed and fired from federal government jobs in the 1950s and 60s, under orders from President Dwight D. Eisenhower.

“The first thing I ever heard about gay history was Stonewall,” Sabourin said, referring to the 1969 riots at a gay night club in New York.

“Perfect Arrangement” is a fictional story about two gay and lesbian couples – Bob and Jimmy, Norma and Millie – who marry each other’s partners in order to give the appearance of being heterosexuals. As State Department employees, Bob and Norma fear they will lose their jobs if their true identity is discovered. The couples live in side-by-side townhomes, moving back and forth through an opening in a closet to conceal the true nature of relationships.

Sabourin said he was familiar with the work of playwright Topher Payne, who wrote “Perfect Arrangement,” having played a role in a staged reading of Payne’s “Angry Fags” last year. Last week, Sabourin and fellow actor Lauren Knott, who plays Millie, acted a scene from the play on WUNC’s “State of Things” with host Frank Stasio.

Playwright Payne also was interviewed on “State of Things,” along with Josh Howard, producer and director of the documentary film, “The Lavendar Scare.” On Oct. 23, NCSU Libraries hosted a screening of “The Lavender Scare,” followed by a Q&A session with Howard and Jen Stotka, who was interviewed in the film.

Though the play  “Perfect Arrangement” takes place during an era before Sabourin was born, he says he can still understand the frustrations the characters face. “When you look at today’s political climate, it’s hard not to believe that something like the Lavender Scare could happen,” he said.

Sabourin has appeared in Raleigh Little Theatre productions since he was 7, and he has also appeared regularly in other Triangle community theater productions. He earned a bachelor’s degree in drama from the University of North Carolina at Greensboro.

Theater work takes time, Sabourin says, with typically six weeks of night and weekend rehearsals leading up to performances. Last summer, he decided to take some time off to focus on team sports with the Stonewall League.

“I love NC State,” he said. “I love the people and the work environment.”

“Perfect Arrangement” will appear at the Raleigh Little Theatre through Nov. 12.

This post was originally published in The Graduate School News.