Why I Give: ‘I Started Giving to the College Out of a Sense of Gratitude for My Education. I Had Many Career Opportunities Because of My Doctorate, and I Want Other Students to Have Similar Opportunities,’ Says Delores Parker ‘78EDD

Editor’s Note: This is part of a monthly “Why I Give” series in which NC State College of Education alumni, students, faculty and staff share why they support the college.

Growing up, Delores Parker ‘78EDD wanted to be an attorney. After she graduated from Clark College in Atlanta with a bachelor’s degree in political science and a minor in secondary education, she went to work as a counselor for a children’s center in New York. There, she developed a new passion — working with young people and making a difference in their lives.

That experience changed her career path and Parker decided to pursue a Master of Science in counselor education. When she graduated from North Carolina A&T State University with her master’s degree, she accepted a counselor position at Davidson County Community College — her first role in community college education and the start of her career.

While working at Davidson County Community College, Parker realized the important role community colleges play in the lives of so many students, especially adult learners. The more she worked with students and experienced their educational growth, the more she realized she had found her niche. She also became interested in higher education public policies. At the time, the North Carolina Community College System (NCCCS) was in its infancy and there were career opportunities available for those who were academically prepared. Parker learned that the North Carolina General Assembly provided financial assistance to individuals who worked in the NCCCS and wanted to pursue administrative positions in community colleges. And she was interested in professional growth opportunities and diving deeper into public policy.

Parker was introduced to the NC State College of Education and Edgar J. Boone, professor and head of the former Department of Adult and Community College Education, through a colleague. With Boone’s encouragement, she enrolled in the Doctor of Education in adult and community college administration program because it was designed specifically for people who wanted to work in community colleges.

“I started giving financially to the college out of a sense of gratitude for my education. I had many career opportunities because of my doctorate, and I want other students to have similar opportunities,” Parker said.

Obtaining her doctorate degree opened many doors to opportunities for Parker. She became the director of counseling services at Davidson County Community College before returning to her alma mater, North Carolina A&T State University, as the dean of student development. From there, she became the first female vice president at Guilford Technical Community College, where she served as vice president for student services and curriculum programs.

She later took a position as program director and associate director of the Kellogg National Fellowship Program at the W.K. Kellogg Foundation, of which she is a graduate. Parker eventually returned to North Carolina and accepted a position as senior vice president and chief academic officer for the NCCCS before retiring in 2010 after a 30-year career within the system.

Parker credits the NC State College of Education for preparing her academically for a successful career. She says she contributes financially to the college as an investment to ensure other students have the same opportunities she did.

In the Q&A below, Parker talks about why education is important to her, why she pursued a career in community college education, why she gives to the College of Education and what motivated her to join the college board. The following is edited for length and clarity.

Why is education important to you? How has it shaped you?

Education is important because it makes a difference in a person’s life. It allows one to be able to enjoy a comfortable lifestyle, become a contributing member of society and change career opportunities several times during a lifetime. Education is the key to ensuring future generations will be prepared to assume leadership roles.

Having an education allowed me to have major leadership opportunities. I was able to make a difference in the lives of students and employees. For many of these individuals, I served as a mentor and/or support. My years of community service have included assisting three communities with building affordable homes for those in need. As an educated person, I stay abreast of and participate in the political process at all levels.

What led you toward a career in community college education?

Upon completing my degree at North Carolina A&T, I learned from the dean of the graduate school that Davidson County Community College was interested in employing an African American counselor. I applied for the position and was selected. This was a wonderful opportunity for me. The student population was diverse, including Vietnam War veterans and women. My work was rewarding and I knew the community college was the place for me.

What inspired you to start giving to the College of Education?

I started giving financially to the college out of a sense of gratitude for my education. I had many career opportunities because of my doctorate. For this reason, I want other students to have similar opportunities. My funds will also ensure the college continues to recruit the most academically gifted professors.

What makes you passionate about the funds you choose to support?

Through the Excellence Fund, Dean Mary Ann Danowitz will make wise decisions of where the funds are best needed. It may be for student scholarships or recruiting professors. This year, I contributed to the Edgar J. and Ethel B. Boone Adult and Community College Award Fellowship. These funds will be used to assist students in the doctoral program. Dr. Boone was my professor and mentor. The funds I contribute are a way of honoring his legacy.

As a generous donor to the College of Education and a member of the Chancellor’s Circle, why is it important for you to give to the university?

As previously mentioned, my gifts will support student scholarships and the recruitment of professors. There are many students who need financial support in order to complete their education. Without these funds, they may not be able to do so. The college is nationally-ranked and it is important to maintain that status.

Is there something you hope to see happen as a result of your gifts?

Additional student scholarships, world-renowned professors and the continuation of our national ranking. The college has also made a commitment to diversity and has launched several equity initiatives. For example, Dr. Anona Smith Williams’ LIFT program is designed to encourage high school students of color and bilingual students to become teachers.

What would you say to someone considering giving to NC State?

I would encourage individuals to support the university’s mission. Each gift is important as the cost of education continues to increase. I would also share with them my rationale for giving.

Why did you decide to join the NC State College of Education board?

I was honored to join the board for several reasons. It allows me to stay connected with current issues at the university and in higher education, I am learning about the commitment the college continues to make to community colleges, and I get to serve on the board with leaders who I have previously known and respected. 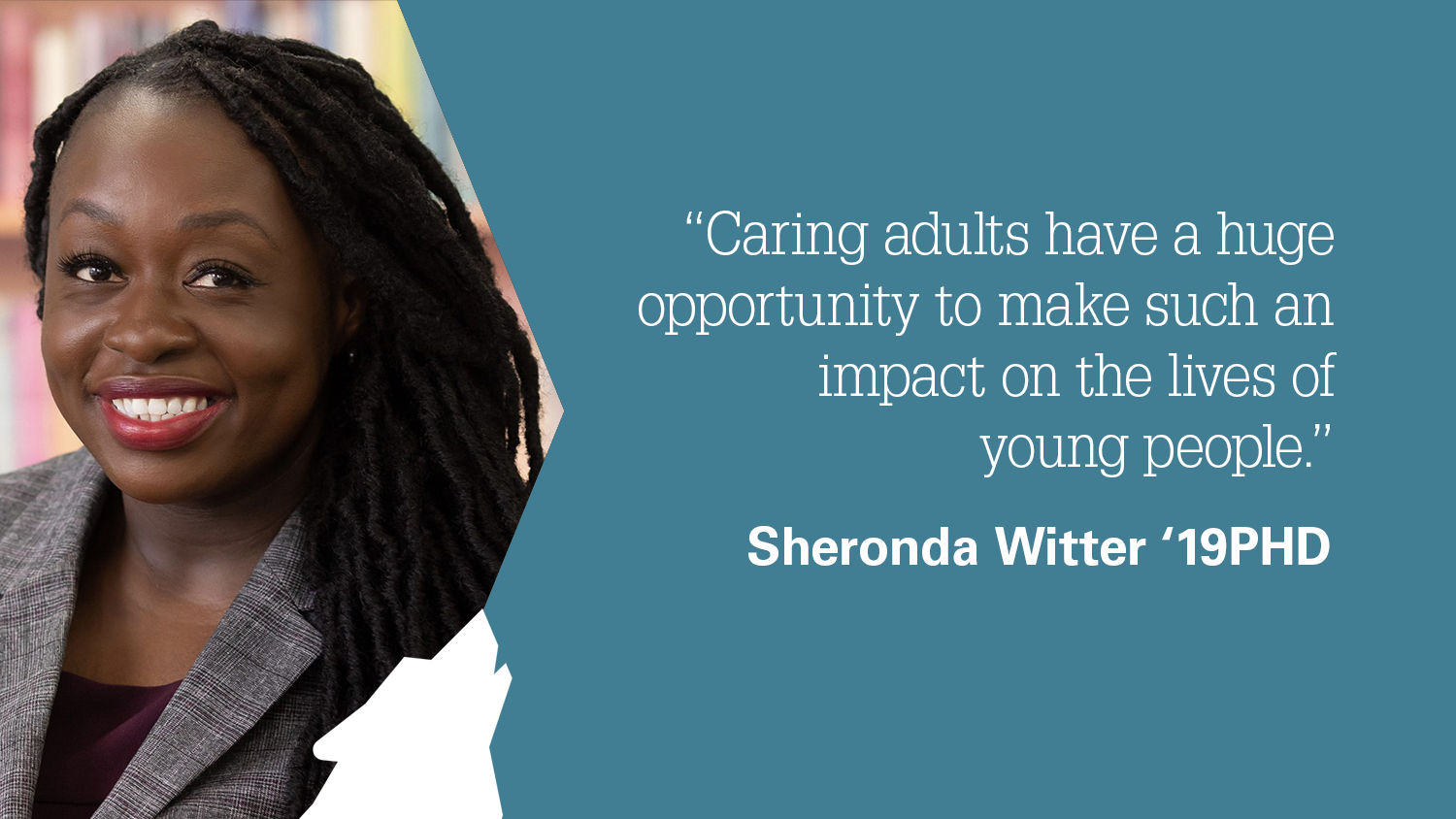 #WhyIChoseEducation: 'Caring Adults Have a Huge Opportunity to Make Such an Impact On The Lives of Young People,' Says Sheronda Witter '19PHD