As part of Celebrating 90 Years of NC State Education, we asked you to share your stories of why you chose education and why you love the NC State College of Education. Below is one of the many stories we received demonstrating how we’re leading the way in education in North Carolina and beyond. 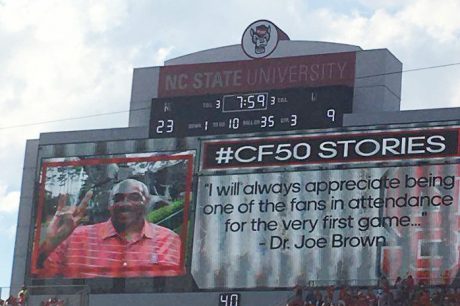 After hearing Josephus Brown recite lines from Shakespeare’s Hamlet, his high school English teacher pulled him aside to ask if he had thought about going to college. It was a run of the mill conversation for most students, but this happened in the late 1960s in the recently integrated Cary High School.

“I remember Mrs. Crook telling me I needed to go to college,” he said. “It took a lot for a white teacher to encourage a black man at that time. That day she told me I was smart, and not just smart for a black man.”

That conversation changed the course of Brown’s life. After serving in the military, he went to college at North Carolina Central University using his GI Bill to study history.

Growing up, he was one of 10 children in his family and often corralled his many nieces and nephews to play “school” in the afternoons. He always assumed the role of teacher.

While deciding what to do after college, he thought back to those childhood memories and recalled a quote from William Cullen Bryant’s “To a Waterfowl.”

‘He, who, from zone to zone, Guides through the boundless sky thy certain flight, In the long way that I must trace alone, Will lead my steps aright.’

“I believe the Lord guided me into the field of education,” he said. “I chose it after realizing that I loved children, had ‘pretended’ to be a teacher for my nephews and nieces, and loved sports.”

Upon graduation, he secured a job with the Wake County Public School System as an elementary Physical Education teacher. A job that would keep him busy for 34 years.

As with many educators, Brown’s love of learning only grew as he continued to shape the minds and attitudes of his students. So he enrolled in NC State College of Education’s graduate-level program for educational leadership.

“My father was a custodian at NC State for over 37 years, so there existed an instant connection,” he said about his decision to go back to school.

He said his father began his career in the Yarborough Steam Plant, next to the State College smokestack. As Brown attended classes in the College of Education’s Poe Hall, he was able to view the smokestack on a regular basis and reminisce about his father and the work ethic his parents instilled in him.

That work ethic led him to earn his doctorate in Educational Leadership, Policy and Human Development in 2012. Now enjoying retirement, he looks back on his career as an educator and the impact educators had on his life.

“Every life I’ve touched traces back to Mrs. Crook,” he said.