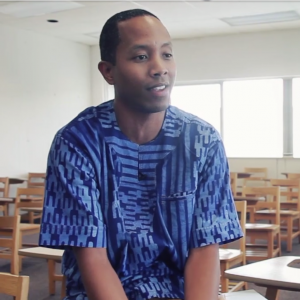 A North Carolina State University faculty member was honored for his innovative and creative way at approaching a counseling need at the 2014 North Carolina Counseling Association Awards last month. Dr. Marc A. Grimmett, associate professor of counselor education, was recognized with the The Innovative/Creativity in Counseling Award for creating and producing the film, MY MASCULINITY HELPS. It is a short documentary that explores the role of African American men and boys in the prevention of sexual violence.
“One of our goals for this project was to present African American men and boys as natural helpers, educators, and allies in the prevention of sexual violence, both to serve as a model for male and African American communities and to present a counter-narrative to often inaccurate and misleading portrayals of African American masculinity,” said Grimmett.
>As a result, African American men and boys are presented demonstrating understanding and support for survivors of sexual violence, while also working to end rape culture. In the same way, another primary goal of the documentary was to provide specific information on how anyone can work to end rape and help survivors.
MY MASCULINITY HELPS was supported by the Engaging Men and Boys grant from the U.S. Department of Justice, Office on Violence Against Women, that was awarded to the North Carolina Coalition Against Sexual Assault (NCCASA). Grimmett submitted a proposal for a short documentary to NCCASA and once accepted, David Hambridge, a freelance filmmaker was hired to work with Grimmett to make the film. Hambridge graduated from NC State in 2009 with a degree in Arts Applications. For a year and a half, Grimmett and Hambridge worked together to create a short educational documentary that explores the roles of African American men and boys in the prevention of rape and sexual assault, and being helpful to survivors.
This film can be used for educational and training purposes related to the prevention of sexual violence and used as a tool to: engage men and boys in the deconstruction and reconstruction of gender roles, masculinity, and power; educate men and boys about rape culture and their roles and responsibilities in the prevention of rape and sexual assault; and facilitate the training of men and boys as educators, advocates, and activists for the prevention of sexual violence.
NC State University will have a screening of MY MASCULINITY HELPS on Wednesday, April 2 at 7:30 p.m. in the Witherspoon Theater. For more information on the film, viewing the trailor, and finding a screening near you, visit:https://mymasculinityhelps.com/