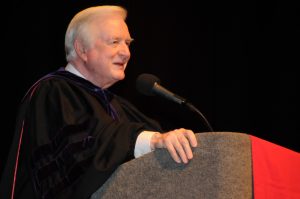 Governor Jim Hunt has been a Member of the law firm of Womble Carlyle Sandridge & Rice, PLLC since 2001 after completing the last of his four historic terms as Governor of North Carolina (1977-1985, 1993-2001). Nationally recognized for leading his state through two decades of dramatic economic change and educational reform, Governor Hunt spearheaded the transformation of its economy from traditional industry to knowledge-driven industries – biotechnology, pharmaceuticals and IT.

Among his many successes in education, his early childhood education program, Smart Start, has been a model for the nation and has received the prestigious Innovations in American Government Award from the Ford Foundation and the John F. Kennedy School of Government at Harvard. In the last decade of his governorship the schools of North Carolina increased NAEP scores more than any other state in America. In the 1980’s, Governor Hunt and the Carnegie Corporation of New York created the National Board for Professional Teaching Standards which he chaired for ten years.

Uniquely qualified, Governor Hunt continues his promotion of North Carolina as a business friendly destination. Having been instrumental in decisions to move companies to the state, he knows first-hand what moving a global company to North Carolina entails and the benefits it confers. In addition, Governor Hunt continues to collaborate with governors across the U.S. as part of the “State Leaders for the Life Sciences” initiative he founded in 2008. He joined Governor Luther Hodges in 2007 as the only governors in state history to be inducted into the North Carolina Business Hall of Fame. In 2006, Governor Hunt was named one of the ten most influential people in American education, along with Microsoft Chairman Bill Gates and former Presidents George Bush and Bill Clinton.

Global Connections with Educators in China: Looking Back, Looking Forward

It’s been nine years since Hiller A. Spires, Ph.D., Friday Institute for Educational Innovation executive director and NC State College of Education associate dean, was approached to help develop a concept for an innovative high school in Suzhou, China, that would embrace the best of Eastern and Western education practices.