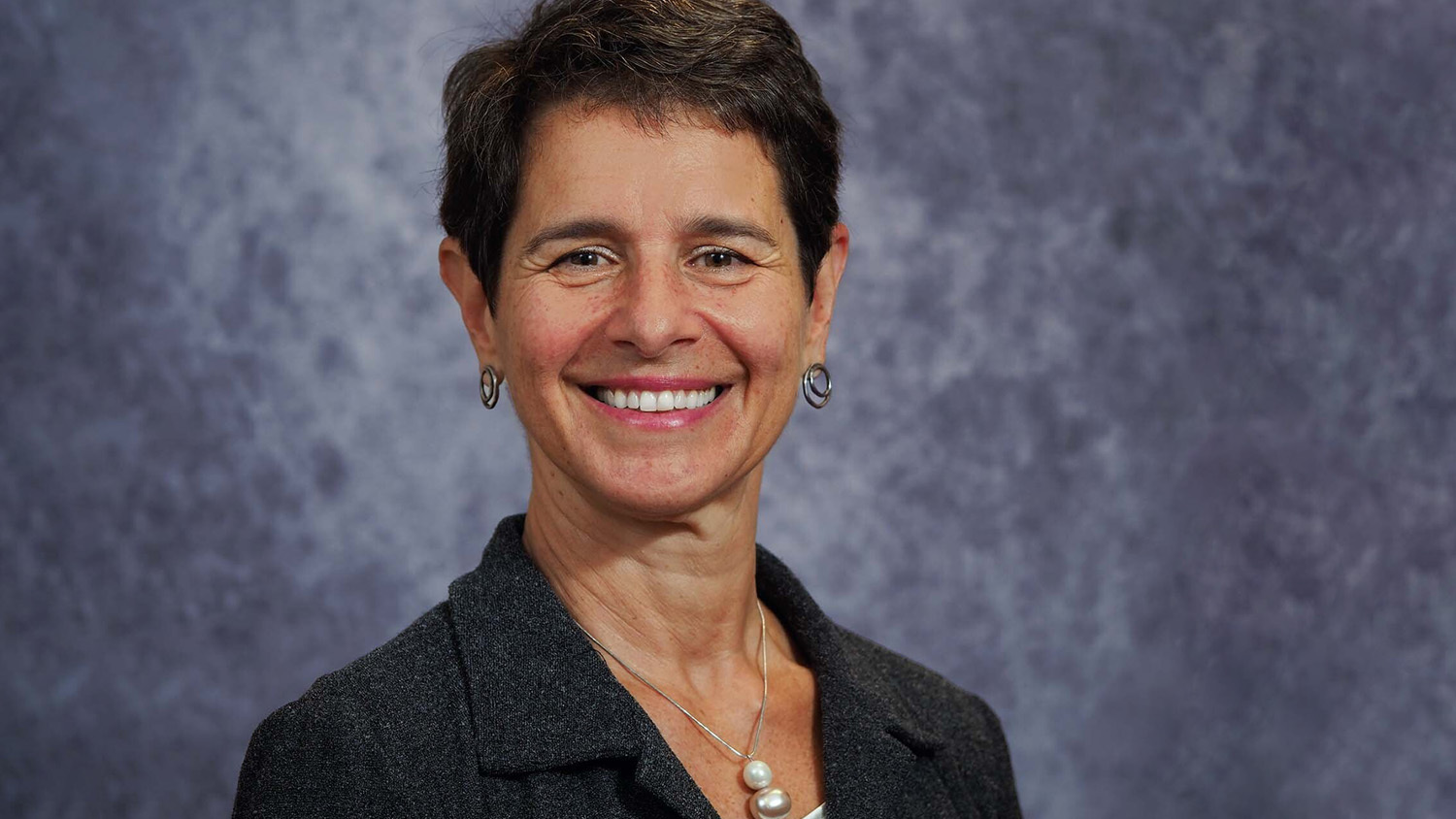 In this interview, Sztajn talks about growing up in urban Brazil, how working in the Amazon jungle changed her life, how she developed her research interest in early mathematics teaching and what it means to her to be Latina and how it will influence her role as interim dean. The following interview has been edited for length and clarity.

How did you end up working in the field of education?

On my name: My first name is PA-oh-LA, three syllables. My last name kind of sounds like “stein.” It’s a Polish name. So that’s why there are so many consonants and very few vowels in the name. My grandfather was Polish. Once I was at the cashier at the grocery store and when the lady saw my name, she said, ‘Honey, it took a lot of love to take that name on.’ And then I told her that was my maiden name. My husband’s last name is actually May, so I could have taken the easy one, but Sztajn is my grandfather’s name and I have kept it.

On how I de-stress: The pandemic actually changed me a lot. I had this opportunity to find new things that I love to do, like walking. At five o’clock, I had to step away from the computer every day. I was working from home and this walking grew and grew and grew. Now I walk a lot. So when I’m not working, I am hiking on the weekends. I am also a yoga junkie, and I do yoga just about every day. I also love reading. I love movies. I love music. My son plays in a band. My husband used to be a musician, so we are always all listening to music.

On my interest in music: I like all kinds of music. When I married my husband, he was a musician. He really provides the soundtrack for my life. I just sit, and he seems to figure out what I want to hear. We listen to a lot of jazz, modern jazz pop,  and 70s-type music. . I also still hear a lot of Brazilian popular music, which I love. It’s got a lot of rhythm. That’s another pandemic thing. I am actually singing in a choir. It’s called Brazilians from All Over the World.

On singing in a choir: I’m part of an online choir singing Brazilian music. There are people from Norway, the U.S., Canada, Belgium, Israel, Holland, Germany and Brazil. I grew up singing in a choir. When I was in my master’s degree program, I sang at the university. Then I married a musician, and I stopped singing for many years when I started hanging out with all the professional musicians. We’ve been married for 27 years, so I had not sung for 27 years. I’m not very good at it, but I’m having fun.

On a book I recently read that inspired me: I just read this really cute book from a Portuguese author. If I translate the title it’s called “ Let’s Buy a Poet.” It’s about a dystopian society in the future where they’re very utilitarian and quantitative and everything is measured and counted. In this society in the future, they buy artists as pets. This family decides to buy a poet as a pet because poets don’t make as much of a mess as other artists and poets forget to eat. So they’re cheap and good pets. But the book is really about how the family is transformed by the presence of that poet in their home. And it’s really beautiful.

I grew up in the upper middle class in Brazil. I was a physics major, and I was finishing my master’s degree in quantum mechanics. I wasn’t happy, and I had a friend who had been working in this group of study called ethnomathematics, which is the study of mathematics of different cultures. He told me, ‘Why don’t you come to these meetings of ethnomathematics?’  So I started participating in that group, and I really enjoyed it.

I was fortunate enough to be put in a project and work in the Amazon jungle for a couple of months with an anthropologist who was doing a study of the Brazilian people called the Suruí people. They first saw a white person in the 1970s. They wanted to know about numbers, how to count and how to deal with business because people were poaching logs from their reservation. So I worked with them, and that completely changed my life.

How did that experience change your life?

When I came back from that experience, I was not the same person. I just couldn’t go back into physics. I was transformed by the idea that people didn’t know early math. I had always loved teachers and always appreciated teachers. So I became a teacher in early mathematics. To this day, I work in early math.

I think math is a huge gatekeeper for people to have opportunities to progress in society. I think even those who will not work with math, they need to understand mathematical ideas and develop their  mathematical thinking. So that’s the work I started to do. How do we make sure every kid can learn math? And over the years my work has focused more on K-2 education because we know third grade is so important.

For many years, people couldn’t show the impact teachers have on students, and it’s still true that socioeconomics is a big factor impacting a student’s future achievement.  And for a long time, research couldn’t really show that teachers mattered. But now we have enough data to actually show teachers do matter. Teachers are the biggest school-based factor impacting student learning. And so, because I wanted more kids to learn math, I started working with teachers.

You’re a native of Brazil. How did you end up in the U.S.?

I had been teaching math for a little bit. At the time, the Brazilian government was giving scholarships to come abroad in areas where there were no doctoral programs in Brazil. Math education was a new idea, and there were no doctoral programs in math education in Brazil. So the Brazilian government sent about 20 people abroad to get Ph.D.s in math education. I ended up at Indiana University. I met my husband there. We got married and moved back to Brazil.

As part of the agreement with the Brazilian government for sending me abroad, when I came back to Brazil, I had to establish a Ph.D. program in math education there. So we lived in Rio for five years, and I started a Ph.D. program at the institution where I used to work before I came to the U.S. The opportunity came to come back to the U.S. and work at the University of Georgia. That was a really, really prestigious math education program. I was super honored, and we moved back to the U.S. in 2000. By then we had two little kids.

In this Q&A, Paola Sztajn talks about her role as interim dean, why she accepted the appointment, her leadership style, the biggest educational issues facing North Carolina and the role the College of Education plays in addressing those educational challenges.

How did you end up at NC State?

I worked in Georgia for a few years. And then I got the opportunity to be a program officer at the National Science Foundation (NSF). I spent three years at NSF. While there, I heard a lot about NC State. I was like, ‘These guys have so many grants. What are they doing?’  I started looking at NC State, and then I learned that NC State was beginning a new elementary STEM-focused teacher education program.  And they needed a math person. That’s me. That is my identity. I applied for the job.

You have been at NC State for 14 years. What has kept you here?

My amazing colleagues. And two other things: I really appreciate the idea of thinking and doing at NC State and being a land-grant university.  I am one who works in applied research, which for me means that you want to do your research and then use it to impact society in a particular way. At NC State, the knowledge we produce is being used for the betterment of society.

The other thing is there is a sense of innovation at NC State that I love. I have worked in other places where I always heard, ‘This is not how we do that here.’ Or, ‘We can’t do that.’ At NC State, it’s ‘We can do that. We can try this new way. Let’s innovate. Let’s approach it differently. Let’s keep asking questions of what we know because there might be a better way.’

I think it’s pretty unique to NC State to combine these three things: amazing colleagues, the idea of thinking and doing and the sense of innovation.

How has being a native of Brazil affected your experiences with education in the U.S.?

A lot of people don’t realize I’m from Brazil. I don’t have the accent of somebody who speaks Spanish because we speak Portuguese in Brazil. So I have a different accent than many people think about when they think about Latina women. And a lot of people don’t realize that Brazil is a melting pot of immigrants from all over the world. So I’m from Brazil, but I have a Polish last name.

I grew up privileged in Brazil, and I was not labeled Latina until I got to the U.S. and until my kids were in school. Because they had an accent, they were placed in lower groups and others thought they couldn’t perform. I think Latino parents know the challenge I’m talking about and that’s something, honestly, I would not have experienced had I stayed in Brazil. I understand the struggles, and it has opened my eyes to how much support underrepresented kids in school need.

How will being Latina inform your role as interim dean?

I am really excited about being a dean who brings diversity to this college and can encourage our underrepresented groups of people to come here as a space where one can grow when working with us. I hope we will be able to reach out to diverse communities and strengthen our relationship with the communities that we already have good relationships with and also with the Latino community in this area.

I feel super excited to have gotten where I have gotten, and I hope to inspire other underrepresented groups to do the same.

Anything else you want others to know about you?

I’m super passionate about education and I think the field in which we work is not an easy one. I am married to a high school teacher, so I’m very aware of the everyday work in K-12 education. And I, myself, I’m in higher education. So I know education has a lot of challenges, but I couldn’t think of a more rewarding field for one to work and to impact society.