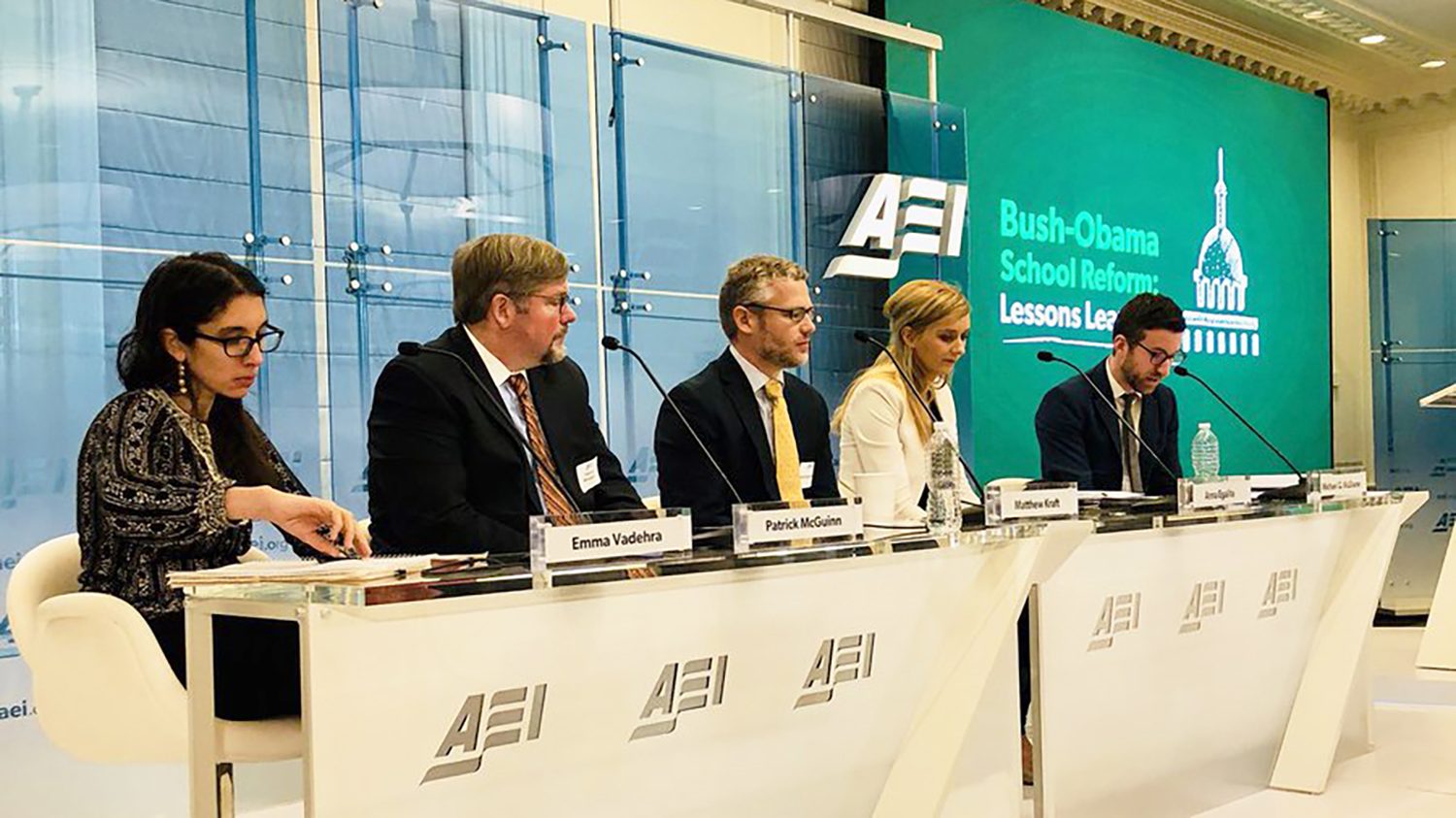 Assistant Professor Anna Egalite served as a panelist Tuesday, Jan. 16, at the American Enterprise Institute’s reflection on school reform during the George W. Bush and Barack Obama administrations. The event provided feedback on chapters for an upcoming book about this topic.

Egalite’s chapter focused on the growth of charter schools between 2000-2016. She spoke to us about her research and her experience at the panel. The edited volume, published by Harvard Education Press, is expected next fall.

The interview below has been edited and condensed for clarity.

Did you miss the #BushObamaSchoolReform event yesterday? That's OK! Catch up on our awesome panel, which starts at the 1:04 mark here: https://t.co/dE4d9YF4B9

How did you get involved with this event?

The panelists consisted of chapter authors and prominent policy experts, many of whom actually worked on the K-12 federal education policies of the Bush/Obama era. For example, the discussant on my panel was Emma Vadehra, who served in the Obama administration as chief of staff to Secretaries John King and Arne Duncan at the U.S. Department of Education. Drafts of each of the chapters are posted online and all of them are focused on school reform during this 16-year span.

The past two decades represent a high water mark for school reform. Although Obama entered office promising a sharp break from the policies of the previous administration, his education policies actually looked a lot like those of his Republican presidential predecessor. Our book analyzes the aggressive testing and accountability policies of this time period, choice-based reforms, teacher quality, standards, civil rights, and school turnarounds. The central question the book seeks to answer is, given the investments and policy priorities of George W. Bush and Barack Obama, what do we now know about K-12 education reform and Washington’s role in supporting such efforts?

What did you communicate during your panel session on policy instruments?

We witnessed a robust expansion of the federal role in education reform under the 43rd and 44th presidents. My chapter focuses on federal efforts to expand charter schools during this era, which are publicly funded but privately operated schools. By the time Bush left office, there were approximately 4,300 charter schools educating 1.3 million students. This growth trajectory continued under Obama so that by 2015, we had over 6,600 charter schools educating 2.7 million students, which represents about 5 percent of all K-12 students.

During my panel presentation, I noted that the dramatic expansion of charter schools throughout both presidencies reflects a two-pronged approach: the combined impact of federal investments and the way in which these two presidents’ education policies privileged charter school expansion. Focusing on the financial piece, for example, the Obama administration oversaw the investment of over a billion dollars in the Federal Charter Schools Program (CSP) between 2009 and 2015, which provides financial assistance to support the planning, implementation, replication, and expansion of charter schools.

Also of note, the Bush administration created an entirely new competitive grant program known as the Credit Enhancement for Charter School Facilities Program to enhance charter schools’ credit so they can access private capital to acquire, construct, and renovate school facilities. Between 2002 and 2008, the federal government invested $739 million in this program alone.

What were your biggest takeaways from the event?

The first is that state priorities and federal priorities don’t always align, which can be problematic if federal inducements start to crowd out state-led innovations. Take for example the case of Race to the Top (RTTT), one of President Obama’s signature education reforms. RTTT focused states’ attention on 19 federal priorities, but individual states may have been better off prioritizing alternative education policies that would have been relevant for their particular context.

My second takeaway is that the federal government has an important role to play in funding education research and development. The first randomized control trial of charter schools was funded by the federal government. It was published in 2010 and included observations from 2,330 students in 36 charter middle schools across 15 states. The significance of this well-regarded study is that it provided the first piece of causal evidence of charter schools’ effectiveness, which allowed both supporters and opponents of charter schools to reassess and reframe their positions on this contentious reform in light of knowledge about its actual impact.

My final takeaway is that we should be careful not to over-rely on test scores alone. To truly judge the success or failure of an education reform, it’s important to collect data on diverse outcome measures, including things like high school graduation, college attendance, college persistence, and even earnings in adulthood.

How would you like to see the #BushObamaSchoolReform discussion continue?

During the conference, those who were watching online could join the conversation on Twitter by using the #BushObamaSchoolReform hashtag. This provided a way for us authors to engage with policy experts, teachers, parents, and scholars, to answer their questions during the panel, and to follow-up with individuals afterward. I look forward to incorporating the feedback I received from the public, the other authors, the incredibly knowledgeable discussants, and from our work after the public presentations and discussions in the authors’ workshop to revise the draft in preparation for publication.

News, Our People, Research and Impact