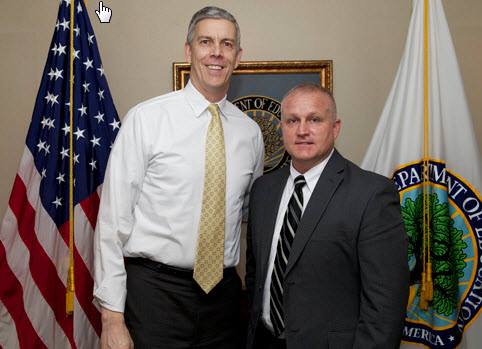 As one of fifteen principals from across the country selected to travel to Washington, D.C., to meet with U.S. Secretary of Education Arne Duncan, Eddie Price was expecting long, eloquent speeches about education from the federal perspective.

Instead, Duncan walked in with a blank sheet of paper and said, “You tell me, and I’ll listen.”

Such was the nature of Price’s recent visit, which was part of an effort to bring education leaders together to discuss education concerns that face each state. Price, the principal at South Johnston High School in Four Oaks, N.C., had the floor to voice concerns about the issues such as teacher pay and morale, as well as the amount of testing required for students.

Prince, who earned a master’s degree in education from NC State in 2004 and a doctorate in education from NC State in 2014, was nominated to participate in the meeting because of his work at South Johnston High School. Since Price took over as the school’s principal in 2010, the graduation rate has improved from 70 percent to 93 percent and the dropout rate has decreased significantly.